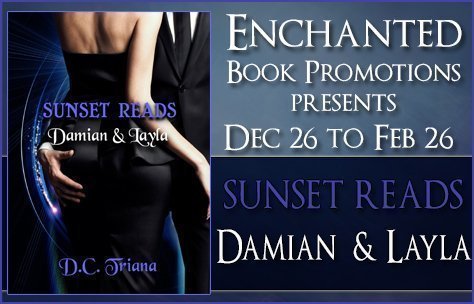 Happy day one of Kwanzaa!

It’s been one year since Agent Damian Trent left for Washington without a word.

One year since he’s seen her beautiful face.

One year since he’s heard his name on her lips.

He’s been recently called back to New York City on assignment, to catch a criminal who’s trying to infiltrate Sunset Reads. The last thing he expects is to work side by side with the woman he turned his back on.

Having her close is an unwanted distraction that he’s more than willing to ignore, if only she wasn’t so damn tempting.

Everything seems under control, until a night of feverish passion has him abandoning all thoughts of reason. Now, he will do everything in his power to get her back, and even more so to protect her.

Layla Reece wants nothing to do with the man who left her a year ago.

The man who took her heart with him, leaving her broken.

After a year of trying to forget Damian Trent, she is finally ready to move on.

But trying to forget him becomes a tedious task when he suddenly reappears in her life.

Although she fights to stay away, his magnetism is too strong and she finds herself giving into the deep timbre of his voice, and the strength and safety of his arms.

Staying away from Damian turns out to be futile, especially when his kisses consume her and his heart shatters the walls she spent so much time building.

Finding herself in danger, she now has to turn to the only man she trusts to keep her safe, but can she trust him enough to give him her heart once again?

D.C. Triana is a new romance author and novelist. She was born in raised in New York and is currently residing in Florida. Last March, Her dream of publishing a romance novel came true with, Sunset Reads: William & Cristina. The novel is currently holding a 4.5 star rating on Amazon as well as GoodReads. She is excited to announce her second novel in the series, Sunset Reads: Damian & Layla, releasing on December 26, 2016.

When she is not delving into her hopeless romantic thoughts, she is expanding her experiences and traveling around the world. She also will not miss an episode of the Walking Dead, has an obsession with Superman, and has watched Pride and Prejudice at least ten times. An avid fan of all types of music and dancing; she enjoys cuddling up with her puppy Obi, and helping new authors like herself. You can visit her at http://www.dctriana/com, or be part of her newsletter where you can take part in giveaways, receive updates on upcoming storylines, and get reviews on hot new titles. Sign up for her Newsletter here: http://eepurl.com/bXH-P9

Win eBook copies of the book, and 3 $10 Amazon gift cards.
a Rafflecopter giveaway