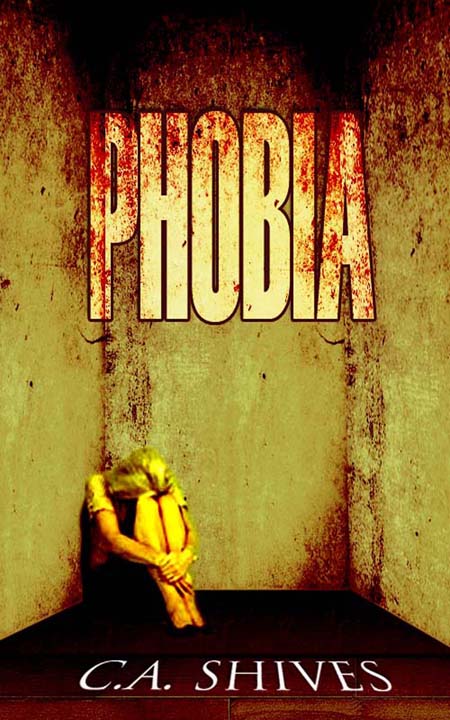 EVERYONE HAS A SECRET FEAR…
Ex-cop Artemis Herne thought he left the grit and crime of the city in the past when he moved to a small town in Pennsylvania. But the discovery of a woman’s dead body, bound and covered with snakes, sends panic through his community and ignites his investigative instincts.
As the serial killer continues to target his prey, Herne must confront his own haunted past to uncover the pattern in the deaths. He soon discovers that every victim suffers from a phobia. And every murder transforms the victim’s worst fear into reality.
Tormented by his personal demons, he is forced to face his own fears as he hunts for a murderer who uses terror for a weapon.

They stared at each other as memories flooded Herne’s mind like a scattering of photographs faded by sunlight. On summer break their freshmen year of college, they shared a bottle of illicit whiskey in Tucker’s basement. Best buddies having a little fun on a typical Saturday night. Walking a street in Hurricane, on their way to meet Tucker’s girlfriend—who would later become his wife—they saw the unmistakable glow of flames a few blocks away. The old brick bakery was on fire. They ran to it, knowing that the building was really a shelter for battered women. Once there they found a thin, long-haired man in the parking lot, holding a lit Molotov cocktail while screaming the name of his wife. Two more unlit homemade frags sat on the asphalt.

When the man saw them, he threw the bomb against the building and charged at Herne.

Herne pounded at the man’s face until his fist pulverized bone into tiny shards. Through a red haze of fury, Herne only saw the face of his sister—his sweet, young sister—beaten to death in her teenage years by a jealous boyfriend.

Tucker pulled him away into the night as sirens sounded in the distance. The man spent years in reconstructive surgery, and he never looked anything less than a monster. The brain damage he suffered made it impossible for him to identify his attackers.

There was no trail through the woods and Emmert stumbled each time his foot struck a rock or exposed root. He panted with exertion and fear, and sweat mingled with his tears as they moved deeper into the trees.

The Healer wore a baseball cap with the bill pulled low to hide his features. He was certain no one was watching them in the secluded woods, but it wouldn’t hurt to be cautious.

The afternoon sun blazed in the sky, and The Healer felt some pressure and a little tinge of fear at the sight. The task before him would take some time, and he knew that daylight was limited. He urged Emmert faster through the trees and brush.

Emmert scratched his face on a branch and cried out as blood spilled down his cheek. Suddenly, in front of them was a clearing in the woods.

The open area was small, just a patch of grass and ferns among the trees, and in it rested a plain wooden box with a hinged lid, the size of a coffin. The pine wood was so fresh that The Healer could smell it.

“I’m not a craftsman, unfortunately,” The Healer said. “Please pardon my amateur attempt to make your casket.”

Author Bio
C.A. Shives is the author of PHOBIA, a suspense novel based in a small Pennsylvania town.  When not reading, writing, editing, or publishing, C.A. enjoys watching a good action movie. The author also spends time target shooting on the range and raising backyard chickens.  C.A. loves cheesy poofs, Bruce Willis movies, and wine (often simultaneously). The author is also a fan of Professional Competitive Eating.  A second book in the Artemis Herne series is scheduled for a winter 2012 release. C.A.’s upcoming novel weaves a dark tale of horrific vigilante justice tainted by the bitter taste of revenge.

There is a giveaway for a $50 Amazon Gift Card spread over all blogs participating.

This tour runs from August 1st to August 15th.