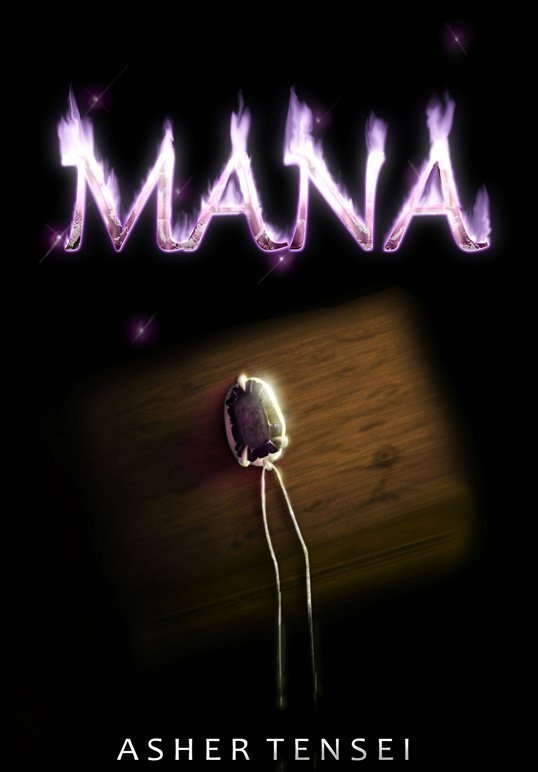 Eurich is thrown into a seemingly ill-fated destiny. After learning of his legendary magic, he is convinced that he alone must stop an impending doom, but nothing is ever as it seems. His best friends Jason and Raine try their best to help him save the world, but help isn’t what he needs  —he needs a way across the barrier.

Despite this fate thrust upon him, Eurich knows what is coming. The world is headed toward Chaos due to a weakening barrier between Earth and a world that has been hidden for millennia.

Our world is about to take a sharp turn for the worse. Extra moons are rising in the sky, and panic is at an all-time high. Worst of all, there are no explanations.

Saving the world begins with a choice  —but is humanity worth him risking his own life?

Although Asher Tensei is relatively young, he has already traveled the world as he has been a military brat since the age of four. He has always wanted to share his creative writing, and it was in Germany that he realized people also really enjoyed reading his stories. Mana was composed shortly after and it instantly got the support of a small but enthused local readership. Few could believe that Asher had written a full length novel during his fifteen minute breaks while working at Burger King. He is very passionate about the fantasy genre and graciously gives thanks to the one series that made him realize that writing high concept YA fantasy was something he wanted to do–The Twilight Saga. He maintains, and frequently updates, his site http://ashertensei.com/.

“Damn…people in this town are crazy,” he said to himself. “2012 doesn’t seem like the year…” He dusted himself off and glided to his stop to make up for lost time. He was relieved that a few students congregated there. It calmed him from the encounter a little.

“Hey, Eurich!” A soft declaration came from the small crowd of students. A girl with light mahogany hair pushed her way through the minute gathering. She skipped through the crowd with her hazel eyes fixated on him.

“Patricia!” Eurich shouted excitedly. He ran over to her and picked her up, twirling her in a hug.

“No touching…don’t think you wanna do that,” she allowed.

“Why not?” He set her down and took a step back.

“I’m sick,” she frowned, then covered her nose. “You think I would be wearing this to school?”

“I can’t tell,” Eurich reassured. “But now that you mention it, those shorts are a little too short for dress code.”

“My mom thinks it’s bad, I have to go home…and I really don’t know how long I’ll be out.”

“Why’d you come here then?”

“You coulda texted me,” he laughed.

“Well, you coulda told me you had a phone,” she chuckled sparingly. “I would hug you, but…ya know.”

He smiled. “You know I don’t get sick that often. But I hope you get better soon! Need me to walk you home?”

“Nope, I’m good. Just wanted to catch you before you left…”

“Freedom!” Jason opened the door to Eurich’s house and the first thing he did was run up the stairs to Eurich’s room. “You mind if I crash here? I swear I’d fall asleep on the way home.”

“Don’t worry about it. You know you’re welcome here anytime,” Eurich replied, laying down sheets and pillows on the floor.

Jason and Eurich both laughed, but it was short lived. Jason scowled, grimacing, not hiding the fact that something was bothering him.

“Why did Mr. Andrews take only you and Raine, what happened up there?” Jason rarely took a depreciate tone.

“It was nothing much. He just wanted to talk to us about grades and stuff,” Eurich stuttered a little.

“I saw…that thing you turned into.” Jason didn’t waste any time.

“You had wings, and you fell, and you didn’t die. It was…you were black and purple…and-and, the sky turned purple…why didn’t anyone else see it?”

“Jason, it’s okay, just calm down,” Eurich said, sitting down at his computer desk. ”He said no one could see us…” He slid to his drawer, quickly opening it to grab the book. There was a moment of pause before he tossed it on the bed “It turns out everything in this book is real,” he said while flipping the pages. “Mr. Andrews knew, my parents knew, and even Raine’s mother knew.” He then flipped the page to Oblivion. “This…is my father, and I guess this is me now.”

“Eurich, you can’t expect me to believe that you were right this whole time..”

“Jason, you said you saw it with your own eyes…I’m a dragoon.” Eurich sighed. “Just…don’t tell anyone.” As a last resort, since Jason had a hard time believing him, he stood up focused his mana in the stone and transformed.

“I don’t really care about them being pretty. I like them just fine, though I think Patricia could be a little taller.” Eurich chuckled.

“I see them.” Jason stood with his back leaning on the table.

“Boy am I tired,” Raine complained, dropping her black garment bag on the table when she approached it.

“Raine made me put back at least ten dresses, she’s got really picky taste.” Patricia huffed, then sat down.

“I think she was getting back at you for throwing her food away.” Eurich got up and turned on the flat panel television that hung from the foundation.

“Let’s hope not, I found some really cute ones.” Patricia turned toward the TV as soon as Eurich turned it on..

“CNN?” Raine complained again. Everyone that she could see through the glass doors were watching in awe for some reason, the same reaction came from the people who were outside.

“Just moments ago.” Raine turned as the newscaster on the television spoke. “A strange occurrence has people questioning about what is happening in the sky. Not only was it seen here, but it was also seen in the Bahamas and across the North Atlantic. It is worldwide and given the short time in which it’s risen, scientists cannot even begin to explain what is happening. The appearance of a second moon visible from earth, what does this mean? Are the doomsday prophecies correct? Are aliens finally giving us a final clue? Stay tuned for more.”