Mocha Girl Read November Book of the Month is Twelve Years a Slave by Solomon Northup.  Take a minute to see what this book and the author are all about. 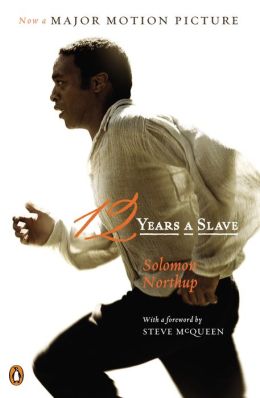 Soon to be a major motion picture starring Chiwetel Ejiofor, Michael Fassbender, Benedict Cumberbatch, Paul Dano, Paul Giamatti, Lupita Nyong’o, Sarah Paulson, Brad Pitt, and Alfre Woodard, this tie-in edition features a foreword from acclaimed director Steve McQueen
Perhaps the best written of all the slave narratives, Twelve Years a Slave is a harrowing memoir about one of the darkest periods in American history. It recounts how Solomon Northup, born a free man in New York, was lured to Washington, D.C., in 1841 with the promise of fast money, then drugged and beaten and sold into slavery. He spent the next twelve years of his life in captivity on a Louisiana cotton plantation.
After his rescue, Northup published this exceptionally vivid and detailed account of slave life. It became an immediate bestseller and today is recognized for its unusual insight and eloquence as one of the very few portraits of American slavery produced by someone as educated as Solomon Northup, or by someone with the dual perspective of having been both a free man and a slave. (July 1808 – after 1857) was a free-born African American from Saratoga Springs, New York. He is noted for having been kidnapped in 1841 when enticed with a job offer. When he accompanied his supposed employers to Washington, DC, they drugged him and sold him into slavery. From Washington, DC, he was transported to New Orleans where he was sold to a plantation owner from Rapides Parish, Louisiana. After 12 years in bondage, he regained his freedom in January 1853; he was one of very few to do so in such cases. Held in the Red River region of Louisiana by several different owners, he got news to his family, who contacted friends and enlisted the Governor of New York in his cause. New York state had passed a law in 1840 to recover African-American residents who had been kidnapped and sold into slavery.

Northup sued the slave traders in Washington, DC, but lost in the local court. District of Columbia law prohibited him as a black man from testifying against whites and, without his testimony, he was unable to sue for civil damages. However, the two men were charged with the crime of kidnapping and remanded into custody on $5000 bail. However, without Northup’s testimony, a conviction could not be secured and the men were released.Returning to his family in New York, Northup became active in abolitionism. He published an account of his experiences in Twelve Years a Slave (1853) in his first year of freedom. Northup gave dozens of lectures throughout the North-East on his experiences as a slave, in order to support the abolitionist cause.

In the early 1860s, Northup, along with another black man, aided a Methodist minister in Vermont in helping fugitive slaves on the Underground Railroad.  The circumstances of Northup’s death are uncertain.  Solomon Northup’s memoir was reprinted several times later in the 19th century. An annotated version was published in 1968, edited by Sue Eakin and Joseph Logsdon. The memoir was adapted and produced as a 2013 film by the same name by Steve McQueen, starring Chiwetel Ejiofor as Northup. Since 1999, Saratoga Springs, New York, has celebrated an annual Solomon Northup Day. (read more) – From Wikipedia