This Monday’s Memory is a review of last weeks book The Velveteen Rabbit.  Take a minute to read the amazing review from Mocha Girl Karen.  Thank you so much Mocha Girl Karen for this review.

The Velveteen Rabbit was one of my favorite books as a child. I loved it so much that even now its powerful message of how we become real through love runs throughout my own writing especially my first novel.

My favorite part of the whole book is when the rabbit is talking to the much older and wiser Skin horse about life:

The Skin Horse had lived longer in the nursery than any of the others. He was so old that his brown coat was bald in patches and showed the seams underneath, and most of the hairs in his tail had been pulled out to string bead necklaces. He was wise, for he had seen a long succession of mechanical toys arrive to boast and swagger, and by-and-by break their mainsprings and pass away, and he knew that they were only toys, and would never turn into anything else. For nursery magic is very strange and wonderful, and only those playthings that are old and wise and experienced like the Skin Horse understand all about it.

“What is REAL?” asked the Rabbit one day, when they were lying side by side near the nursery fender, before Nana came to tidy the room. “Does it mean having things that buzz inside you and a stick-out handle?”

“Real isn’t how you are made,” said the Skin Horse. “It’s a thing that happens to you. When a child loves you for a long, long time, not just to play with, but REALLY loves you, then you become Real.”

“Does it hurt?” asked the Rabbit.

“Sometimes,” said the Skin Horse, for he was always truthful. “When you are Real you don’t mind being hurt.”

“Does it happen all at once, like being wound up,” he asked, “or bit by bit?”

“It doesn’t happen all at once,” said the Skin Horse. “You become. It takes a long time. That’s why it doesn’t happen often to people who break easily, or have sharp edges, or who have to be carefully kept. Generally, by the time you are Real, most of your hair has been loved off, and your eyes drop out and you get loose in the joints and very shabby. But these things don’t matter at all, because once you are Real you can’t be ugly, except to people who don’t understand.” 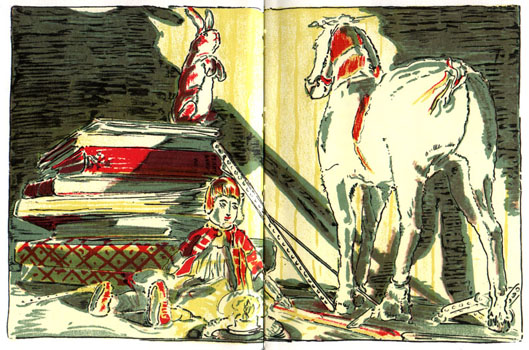 The Skin Horse has his own book, not as well know at the Rabbit’s story. It’s kind of a shame, because the Skin Horse is a powerful character in his own right. I’ve been able after a long search to find a copy of The Skin Horse and it is a beautiful story.

I found out some interesting information about the author. Margery Williams Bianco (1881-1944) was born in London, and first came to the United States when she was nine years old. She lived in the United States and England alternately for the rest of her life. Her first adult novel was published when she was 21, but the Velveteen Rabbit (Pub. 1922) was the first, and best-known, of her thirty children’s books. Something I did not know about her was that her last book Forward Commandos! ( 1944), a story of wartime heroism, included an African-American soldier as one of its characters. During that era it was extremely rare to acknowledge the contribution of blacks to the war effort and the fact that Bianco had written about a black soldier was often noted in the book’s many reviews. Margery Williams Bianco did not live to see World War II come to an end. As Forward Commandos! went on sale she died at the age of 63.

I wish for everyone a wise Skin Horse and the kind of love that allows you to be real.

Thank you so much Mocha Girl Karen for suggesting this book for today’s Monday Memory.

Give us your review, thoughts and memories on this Mondays book.  If you have a recommendation for a Monday’s Memory feel free to contact us at mochagirl@email.com.