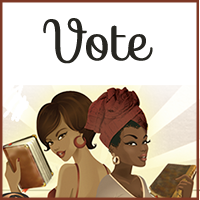 (Books written by male authors in the thriller/mystery genre)

It’s that time ladies.  Time to Rock the Vote!  For the month of May we are going to read a book by a male author in the thriller and/or mystery genre.

As always there are some really great titles up for vote this time.

Here are the Rules for Voting.

The Eye of God (Sigma Force Series) by James Rollins

The Polished Hoe: A Novel by Austin Clarke

The Warlord of Willow Ridge by Gary Phillips