The first Mocha Girl Read Sponored Book of the Month for January 2018 is From Compton to Congress: His Grace for My Race by Walter R. Tucker III.  Take a minute to see what this book is all about.

From Compton to Congress reveals shocking criminal charges, based on an FBI Sting, that send Congressman Walter R. Tucker III reeling, and changes his life forever. Against the great odds of overcoming the tough streets of Compton, young Tucker fulfills his goals of becoming valedictorian of Compton High School, graduate of USC with honors, graduate of Georgetown Law School, passing the California State Bar, and filling his father’s vacant seat as Mayor of Compton—all by age 33. During his meteoric rise in the political arena, at age 35 he becomes the youngest African-American from California to be elected to a U.S. congressional seat. However, the U.S. Attorney’s federal indictment against him shocks the nation. Tucker’s choice to fight the charges against him thrusts him into a criminal trial that tests the condition of his human spirit and provokes us to reflect on every man’s plight versus every man’s fight. 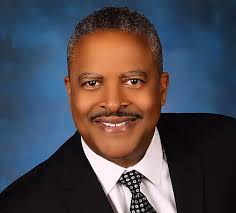 After receiving his Bachelor of Arts in Political Science from U.S.C. in 1978, and his Juris Doctorate  from Georgetown Law School in 1981, Walter worked as a Los Angeles County deputy district attorney, established his own law firm, served as Mayor of Compton, California, and was elected to the U.S. Congress in 1993–all by age 35.

While in his second congressional term, Walter was indicted for receiving bribes while he was Mayor of Compton. Walter fought the case against him, but was convicted in 1995, and sentenced to serve 18 months in federal prison. After his conviction, Walter received his call to full-time ministry. He began his ministry inside prison, and upon release in 1998, he served as Manager of Helps Ministry at Crenshaw Christian Center (Los Angeles, CA), then as the Los Angeles Area Director of Prison Fellowship Ministries (Los Angeles, CA), and was finally ordained in 2003 as a pastor by From the Heart Church Ministries (Suitland, MD) in 2003.

In 2012, after pastoring From the Heart Church Ministries of Chicago for nine years, Walter returned home to the Los Angeles area and founded his own ministry, Truth and Love Christian Church, located in Carson, California. The church has over 300 members 40 different ministries and oversees churches in Africa.

victorious living” through his teachings on “True Prosperity.” God has also graced him to train and equip ministers and church leaders to carry out the purpose of God, fulfill their destiny in Christ, and be a part of effecting a Great Harvest of souls in these End Times.

Walter has been happily married to Reverend Robin Tucker for 31 years and they are the proud parents of Walter R. Tucker, IV,  and Spencer and Autumn Tucker-Rodney, and have one wonderful grandson, Spencer Rodney, Jr.

Walter is still the youngest African American to serve in the U.S. House of Representative from the state of California. (read more)

Congratulations and Thank you Walter Tucker III being our first Sponosred book of the month and the Book of the Month for January 2018!