Today’s guest post is from Mocha Girl Dionne “YVE”.  Former West coast hip-hop artist Dionne aka “Y.V.E.” is from Los Angles, CA.  Her  favorite book of all time is Louise L. Hay’s “You Can Heal Your Life“which transformed her life by showing her how to overcome life’s setbacks. She chose to join M.G.R. because she LOVES to read books and enjoys connecting with like minded women.  The next book she’ll be reading is “Guerilla Marketing” by Jay Conrad Levinson in order to learn how to thrive in this New World Economy.

DO BLACK WOMEN HAVE ANY SAY OF OUR PORTRAYAL IN AMERICAN MEDIA? 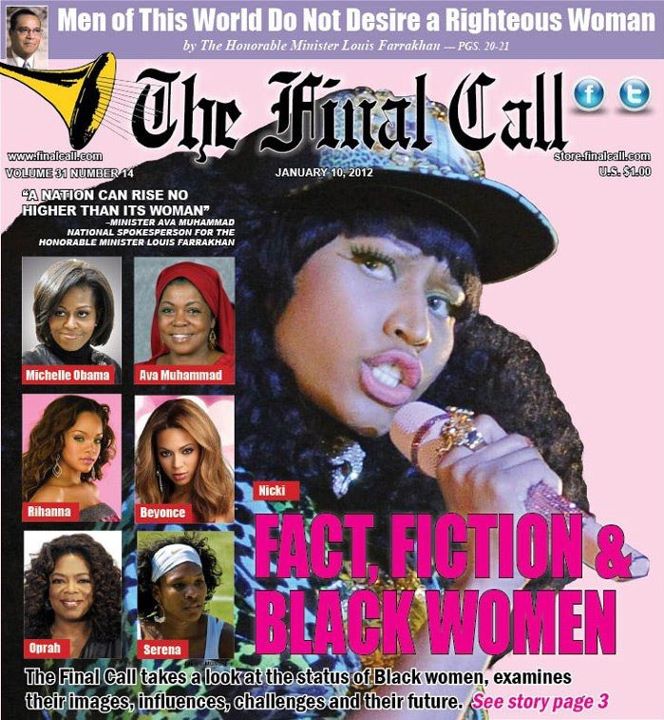 Recently I was driving down the street and a bow-tied Nation of Islam member approached my car at the red light. He had a newspaper in his hand with a large photograph of Nicki Minaj on the cover. She kinda looked like Lil Kim so I rolled down my window and asked him “which female rapper is that?” Once he confirmed it was Nicki, I noticed the paper also had smaller pictures of Michelle Obama, Oprah Winfrey, Beyonce, Serena Williams and Rihanna. I decided to purchase a copy so I could learn more about the title of the article called “Fact, Fiction & Black Women”.

It turned out the article was written by a black female Muslim named Charlene Muhammad, who interviewed a few other people, including Dr. Ava Muhammad. From reading the article, I formed the impression that Dr. Ava Muhammad, who is an attorney and Nation of Islam student minister, couldn’t shake the media image of Black women as “self-hating, miserable, and vindictive.” I have a hard time signing off on that sentiment.

With recording artists “living life like it’s Golden”, such as India Aire, Erykah Badu and Jill Scott, to name a few, could she be focusing on the negative? This is not to say some of us are not self-hating, miserable or vindictive, but I believe those words can be applied to our entire American population at one time or another.

How many Americans drink to excess, smoke, take legal and illegal drugs, overeat and over-indulge in sex to fill a void within ourselves? These behaviors are the result of self-hatred or non-acceptance of who and what we are at a particular moment in time. It’s all of our inability to accept our losses and move on to a brighter day. Minister Louis Farrakhan said, “God cannot make us the head if the woman is not lifted. If God does not lift the woman, the man will never come up, so if God is going to make a new world and a better world, He is going to make that world coming through a woman.” That sounds like a heavy burden to me. Black women already shoulder the vast amount of responsibility as head of most Black households. It seems like God needs to lift up the Black man to be more of a father to his children and a stable husband for his wife or “baby mama”.

Some cite “Basketball Wives” and “The Real Housewives of Atlanta” as examples of the failure to show positive role models to our youth. I contend that reality shows were not created to show positive role models. Some people in real life are low-down, dirty, backstabbers. Sorry to hold up a mirror to how some of us are living but that’s just simply what I call “keepin’ it real”.  We have grimy elements in our culture and that shouldn’t be swept under the rug. Some of us have people in our family like that, and even though they are far from perfect, they certainly do exist. Just like we have Halle Berry, we have black women comics on stage with mouths so filthy, they say things that embarrass a grown woman.

As a former record label owner/female rapper called, “YVE THE ORIGINAL WOMAN”, I remember putting a song on my 2nd album where I wondered if I should censor the lyrics where male rappers said things about certain females that could be found offensive. I made an executive decision not to censor it because if the rap music I listen to was a movie, it would be rated R. As an adult, I feel other adults should have the right to choose what they say and listen to. Although the content is not at all appropriate for children, it was created for those 18 years old and over.

DO BLACK WOMEN HAVE ANY SAY OF OUR PORTRAYAL IN AMERICAN MEDIA? I say yes we do-individually AND collectively. Does Oprah Winfrey have any say? Hell yeah. Does Michelle Obama? Yeah. What about the Black female authors, entertainers,  film directors, politicians, astronauts, athletes, entrepreneurs and broadcasters? Um, yes. Others disagree and say the entertainment industry is an institution that promotes Black women as “bootylicious rump shaking females on music videos”. In my opinion, that’s just one dimension of the wide spectrum of images that I have seen of us on TV and film.

Now that I’m not currently selling rap music, honestly, the only way I can see how I can make any impact on the portrayal of Black women in media is through my own individual words and behavior as well as what books, TV, films and internet sites I support in media. What about you? What impact can you personally have?

Thank you Mocha Girl Dionne “YVE” for this guest post.  Feel free to comment below and if you would like to submit a guest post about Black Women, books or something along those lines, please email me at mochagirl@email.com.