And now we have a winner for our first Beverly Jenkins book.

by Beverly Jenkins.  Take a minute to see what this book is all about. 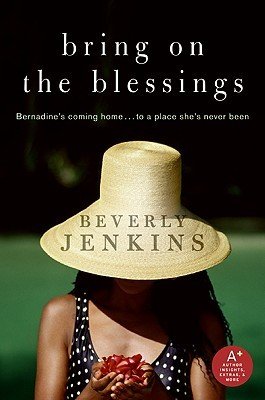 On Bernadine Brown’s fifty-second birthday she received an unexpected gift—she caught her husband, Leo, cheating with his secretary. She was hurt—angry, too—but she didn’t cry woe is me. Nope, she hired herself a top-notch lawyer and ended up with a cool $275 million. Having been raised in the church, she knew that when much is given much is expected, so she asked God to send her a purpose.
The purpose turned out to be a town: Henry Adams, Kansas, one of the last surviving townships founded by freed slaves after the Civil War. The failing town had put itself up for sale on the Internet, so Bernadine bought it.
Trent July is the mayor, and watching the town of his birth slide into debt and foreclosure is about the hardest thing he’s ever done. When the buyer comes to town, he’s impressed by her vision, strength, and the hope she wants to offer not only to the town and its few remaining residents, but to a handful of kids in desperate need of a second chance.
Not everyone in town wants to get on board though; they don’t want change. But Bernadine and Trent, along with his first love, Lily Fontaine, are determined to preserve the town’s legacy while ushering in a new era with ties to its unique past and its promising future.

Beverly Jenkins is an African-American historical romance writer. She and her family live in southeastern Michigan. Born in Detroit, she graduated from Cass Technical High School and attended Michigan State University where she majored in Journalism and English Literature.
Ms. Jenkins has written sixteen books to date and has received numerous awards for her works, including: the Detroit Free Press Book of the Year, three Waldenbooks Best Sellers Awards; two Career Achievement Awards from Romantic Times Magazine; a Golden Pen Award from the Black Writer’s Guild, and in 1999, Ms. Jenkins was voted one of the Top Fifty Favorite African-American writers of the 20th Century by AABLC, the nation’s largest on-line African-American book club. In May of 2002, Ms. Jenkins published her first historical novel for young adults, titled: Belle and the Beau

. Her second YA, Josephine and the Soldier

followed in 2003.
Ms. Jenkins has been featured in many national publications, including the Wall Street Journal, People Magazine, Dallas Morning News and Vibe Magazine. She has lectured at such prestigious universities as Oberlin University; the University of Illinois; and the University of Michigan. She speaks widely on both romance and 19th century African-American history at libraries, schools and organizations including Romance Writers of America, and the Afro–American Historical and Genalogical Society. She is active in her church and community, and in November 2001 was a recipient of the YWCA Woman of Achievement Award.
In February of 2004, Ms. Jenkins’ first contemporary novel of romantic suspense, The Edge of Midnight

, her fourth novel of romantic suspense will be in stores in November 2006.

(Taken from author’s page at Goodreads.com)

Congratulations Mocha Girl Beverly for being the second book of the month for 2017!