On my drive into work today, I tuned to NPR (National Public Radio).  Yes, I listen to public radio.  When I am not interested in booty shaking music or jokes at 6:30am, I listen to NPR.  Anyways, this is not about NPR.  Today they did a 7 minute feature on the author, poet Shel Silverstein.

Silverstein was born into a Jewish family and had two children.  Later in life, Silverstein loved to spend time at his favorite places, such as Greenwich Village, Key West, Martha’s Vineyard and Sausalito, California. Silverstein continued to create plays, songs, poems, stories and drawings until his death in 1999. He died at his home in Key West, Florida on May 9, 1999,of a heart attack, and his body was found by two housekeepers the following Monday, May 10. It was reported that he could have died on either day that weekend.

Shel Silverstein—the late cartoonist, singer, songwriter, playwright, and mega-selling author of such classics as The Giving Tree and Where the Sidewalk Ends—didn’t like children’s literature. Spoon-feeding kids sugar-sweet stories just wasn’t his style. Fortunately for generations of young readers, someone convinced him to do something about it—namely, break the mold himself. Using edgy humor, clever rhymes, and tripped-out drawings, Silverstein achieved the impossible. He bridged the worlds of adult and children’s art, while becoming wildly popular in the process. 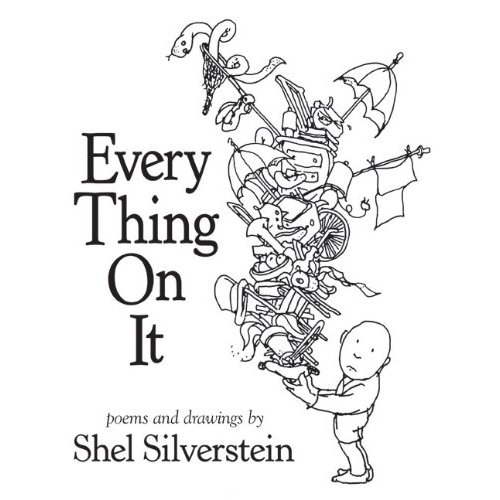 Shel Silverstein left behind a ton of unpublished poems and artwork.  In the past year his family has selected 145 of those unseen poems and drawings and have released the posthumous book  Every Thing On It by everyone’s favorite poet.

To hear the broadcast from today,  click on the NPR link where you will also hear a few poems read by his family.

NPR news broadcast about Everything On It!

NPR Blog about Everything On It!

Barnes and Nobles 30% off coupon for Everything On It!

Did you know:  His books were banned in many libraries