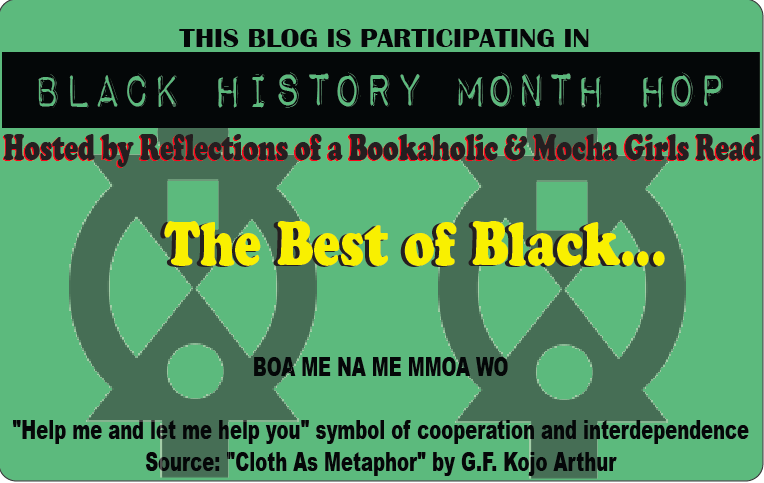 For the last week of the hop we have a few things planned for you. What’s a hop you ask?  At the bottom of each post you will find a list of other sites participating in the hop.  This way you can easily hop from one blog to another.

We have a lot of giveaways going on right now from great Black authors.  All winners will be announced on 2/29/2012.

This is the week we will talk about the best of books by Black authors or with Black character.

The Best of Black Children Books

(a little something for our little Mocha Girls)

Shane W. Evans, illustrator of “Underground: Finding the Light to Freedom” (A Neal Porter Book, published by Roaring Brook Press, a division of Holtzbrinck Publishing Holdings Limited Partnership). Effective interplay of dark and light—dark blues and greens that represent fear and oppression; bright golds that signal the joy of freedom—characterizes this portrayal of a band of slaves’ nighttime escape. They run, rest, get help from others, and finally celebrate their hard-won liberation.

Eloise Greenfield, “The Great Migration: Journey to the North,” illustrated by Jan Spivey Gilchrist and published by Amistad, an imprint of HarperCollins Publishers.

Kadir Nelson, author and illustrator of “Heart and Soul: The Story of America and African Americans,” published by Balzer + Bray, an imprint of HarperCollins Publishers.

Ashley Bryan, storyteller, artist, author, poet, and musician whose numerous awards include the Coretta Scott King Book Award for “Let it Shine” and “Beautiful Blackbird.”  Bryan was born in Harlem and raised in the Bronx. His father worked as a printer of greeting cards. He loved birds. Bryan once counted a hundred caged birds in his childhood home.  Bryan grew up with six brothers and sisters and three cousins. Bryan recalled his childhood in New York the 1930s as an idyllic time, full of art and music.  He excelled in school, graduating from high school at the age sixteen.

Bryan attended the Cooper Union Art School, one of the few African-American students at that time to be awarded a scholarship. He had applied to other schools who had rejected him on the basis of race,but Cooper Union administered its scholarships in a blind test: “You put your work in a tray, sculpture, drawing, painting, and it was judged. They never saw you. If you met the requirements, tuition was free, and it still is to this day,” explained Bryan.

At the age of nineteen, World War II interrupted his studies. He was drafted and assigned to serve as a porter in Europe.  He was so ill-suited to this work that his fellow soldiers often encouraged him to step aside and draw.  He always kept a sketch pad in his gas mask.

When he returned to New York, he exhibited the drawings he’d made as a soldier.  He then went on to Columbia University to study philosophy. He wanted to understand war.  After the war, Bryan received a Fulbright Scholarship to study in Europe.

Bryan taught art at Queen’s College, Lafayette College, and Dartmouth College. He retired as emeritus professor of art at Dartmouth in the 1980s.

He was not published until he was forty years old.  In 1962, he was the first African American to publish a children’s book as an author and illustrator.  “I never gave up. Many were more gifted than I but they gave up. They dropped out. What they faced out there in the world–they gave up.”

His books have won several awards in children’s literature, including the Coretta Scott King Award, the Lee Bennett Hopkins Poetry Award from the Pennsylvania State University, and the Lupine Award from the Maine Library Association. Bryan himself also received the Laura Ingalls Wilder Medal for achievement in children’s literature and the University of Southern Mississippi Medallion from the Fay B. Kaigler Children’s Book Festival.

Congratulations to all of this years winners!  All the information on this blog post came from Wikipedia.  If you would like to read more about the Coretta Scott King Book Award go to the site here.

Check out the other blogs and the books they are talking about. Bloggers add your link to the linky as well. One lucky blogger will win a great prize for joining this week.