Welcome to the first annual Black History Month Hop hosted by Reflections of a Bookaholic and Mocha Girls Read.

This event kicks off the month-long Black History Hop, which will focus on giving black authors, books, and those who support them a month in the spotlight. 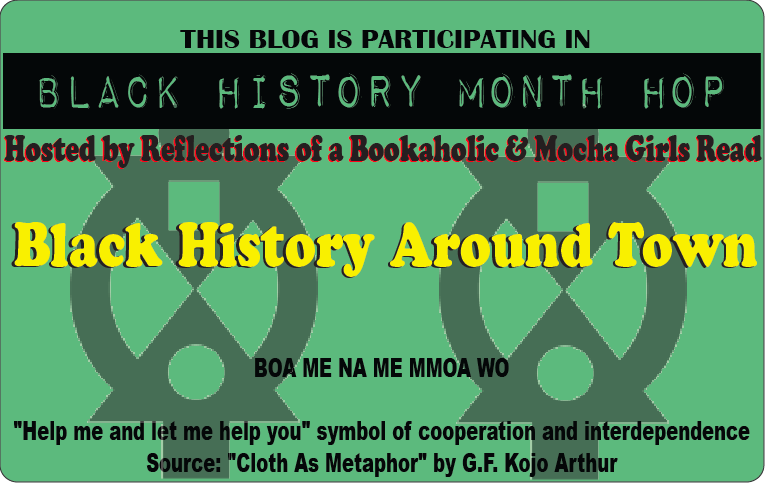 For the first (non-full) week of the hop we have a few things planned for you. What’s a hop you ask?  At the bottom of each post you will find a list of other sites participating in the hop.  This way you can easily hop from one blog to another.

We thought the best way to kick of this hop is to have a giveaway.  We want to have the chance give something back to our readers and members.  In the right hand side menu you will find the giveaway button.  What can you win?  Well Mocha Girls Read is giving one lucky winner 13 books.  Yes!  13 books by Black Authors.   Giveaway ends on February 7th, 2012 at midnight (PST).  Enter now and hop on over the next blog to see what you can win there.

Esowon is a little gem of a bookstore smack dab in the center of Black LA.  This bookstore is the gracious host to Mocha Girls Read -LA Chapter monthly book club meets and we love them.  The men that work there are extremely knowledgeable on everything in the Black Book Universe.  No joke!  If a black author wants to get their book to the Los Angeles readers EsoWon is always their first stop.

For this Around Town #2 post we are posting the book signings at Esowon Bookstore this month.  There are some great authors and books.

The Obama presidency represents a major milestone in black history and the struggle for political, economic and cultural equality in the United States. But how–if at all–has the first black presidency helped move things forward for people of color? Has it delivered the “change we can believe in” and “deepening of democracy” that communities of color organized around? How has the reality and image of a black First Family impacted American culture? What lessons from past struggles can be applied to this unique historical moment to advance multicultural democracy in the U.S.? (read more)

Today, as Black women face an unprecedented health crisis, denial and self-neglect are no longer viable options. This groundbreaking volume is rooted in the pioneering work of the Black Women’s Health Imperative, the nation’s only nonprofit organization devoted to advancing the health and wellness of Black women and girls. It offers a core health philosophy—too long denied Black women—based on putting your health first. (read more)

In the 1960s he exhorted students at Columbia University to burn their college to the ground. Today he’s chair of their School of the Arts film division. Jamal Joseph’s personal odyssey—from the streets of Harlem to Riker’s Island and Leavenworth to the halls of Columbia—is as gripping as it is inspiring. Eddie Joseph was a high school honor student, slated to graduate early and begin college. But this was the late 1960s in Bronx’s black ghetto, and fifteen-year-old Eddie was introduced to the tenets of the Black Panther Party, which was just gaining a national foothold. By sixteen, his devotion to the cause landed him in prison on the infamous Rikers Island—charged with conspiracy as one of the Panther 21 in one of the most emblematic criminal cases of the sixties.  (read more)

Black Cool explores the ineffable state and aesthetic of Black Cool. From the effortless reserve of Miles Davis in khakis on an early album cover, to the shock of resistance in black women’s fashion from Angela Davis to Rihanna, to the cadence of poets as diverse as Staceyann Chin and Audre Lorde, Black Cool looks at the roots of Black Cool and attempts to name elements of the phenomena that have emerged to shape the global expectation of cool itself. (read more)

CONNIE RICE has taken on school and bus systems, Death Row, the states of Mississippi and California, and the Los Angeles Police Department—and won. Not just in court, where she vindicated major civil rights cases, but also on the streets and in prisons, where she spearheaded campaigns to reduce gang violence. Los Angeles magazine concluded that Connie’s work “has picked up where Clarence Darrow left off.” (read more)

Meet one of LA’s finest mystery writers Gary Phillips as he signs and discusses his latest novel TREACHEROUS: GRIFTERS, RUFFIANS AND KILLERS. Mr. Phillips is the author and/or editor of numerous books and graphic novels including: The Jook, The Perpetrators, Angel Town, Violent Spring and many more. Come early with your mystery cap on and enjoy the evening. (read more)

In this intellectual history, Minkah Makalani reveals how early-twentieth-century black radicals organized an international movement centered on ending racial oppression, colonialism, class exploitation, and global white supremacy. Focused primarily on two organizations, the Harlem-based African Blood Brotherhood, whose members became the first black Communists in the United States, and the International African Service Bureau, the major black anticolonial group in 1930s London, In the Cause of Freedom examines the ideas, initiatives, and networks of interwar black radicals, as well as how they communicated across continents. (read more)

A daughter of the poets Hettie Jones and Amiri Baraka, Kellie Jones grew up immersed in a world of artists, musicians, and writers in Manhattan’s East Village and absorbed in black nationalist ideas about art, politics, and social justice across the river in Newark. The activist vision of art and culture that she learned in those two communities, and especially from her family, has shaped her life and work as an art critic and curator. Featuring selections of her writings from the past twenty years, EyeMinded reveals Jones’s role in bringing attention to the work of African American, African, Latin American, and women artists who have challenged established art practices.  (read more)

Founder of the Philadelphia Dance Company (PHILADANCO) and the Philadelphia School of Dance Arts, Joan Myers Brown’s personal and professional histories reflect both the hardships and the accomplishments of African Americans in the artistic and social developments through the twentieth century and into the new millennium. Dixon Gottschild deftly uses Brown’s career as the fulcrum to leverage an exploration of the connection between performance, society, and race—beginning with Brown’s predecessors in the 1920s—and a concert dance tradition that has had no previous voice to tell its story from the inside out. Augmented by interviews with a score of dance professionals, including Billy Wilson, Gene Hill Sagan, Rennie Harris, Milton Myers, Jawole Willa Jo Zollar,  (read more)