7 days of nominations of 31 books!

And now we have a winner for a book for the theme, MEMBERS CHOICE.

The Mocha Girl Read Book of the Month for August is Born A Crime by Trevor Noah. Take a minute to see what this book is all about. 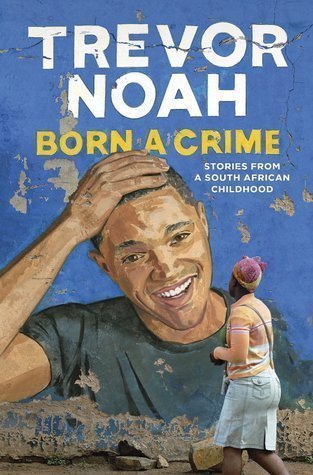 Trevor Noah’s unlikely path from apartheid South Africa to the desk of The Daily Show began with a criminal act: his birth. Trevor was born to a white Swiss father and a black Xhosa mother at a time when such a union was punishable by five years in prison. Living proof of his parents’ indiscretion, Trevor was kept mostly indoors for the earliest years of his life, bound by the extreme and often absurd measures his mother took to hide him from a government that could, at any moment, steal him away. Finally liberated by the end of South Africa’s tyrannical white rule, Trevor and his mother set forth on a grand adventure, living openly and freely and embracing the opportunities won by a centuries-long struggle.

Trevor Noah is the most successful comedian in Africa and is the host of the Emmy and Peabody Award-winning The Daily Show on Comedy Central. This year The Daily Show has been nominated for a Writers Guild Award (Comedy/Variety Series). Noah joined The Daily Show with Jon Stewart in 2014 as a contributor.

It was recently announced that Noah will debut his 9th new comedy special Afraid of the Dark on Tuesday, February 21 on Netflix. The special was shot before a packed house in New York City at the Beacon Theatre on November 5, 2016. Last year, Noah debuted his one-hour stand-up special, Trevor Noah: Lost in Translation, on Comedy Central. Noah was the subject of David Paul Meyer’s award-winning documentary film You Laugh But It’s True which tells the story of his remarkable career in post-apartheid South Africa. His Showtime comedy special, Trevor Noah: African American premiered in 2013. He was nominated for “Personality of the Year” at the 2014 and 2015 MTV Africa Music Awards and won the award in 2015. Trevor’s success has also spanned to sold out shows over 5 continents.

Congratulations Trevor Noah for being the winner of August’s book of the month for 2017!