And now we have a winner for our April book of the Month by 3 votes.

The Mocha Girl Read Book of the Month for April is Crazy Rich Asians by Kevin Kwan. Take a minute to see what this book is all about. 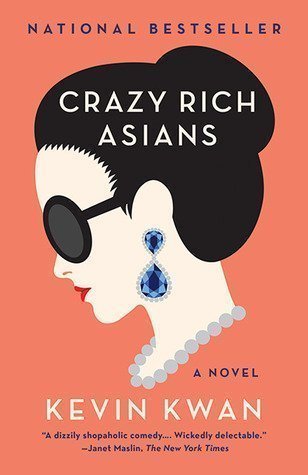 When New Yorker Rachel Chu agrees to spend the summer in Singapore with her boyfriend, Nicholas Young, she envisions a humble family home and quality time with the man she hopes to marry. But Nick has failed to give his girlfriend a few key details. One, that his childhood home looks like a palace; two, that he grew up riding in more private planes than cars; and three, that he just happens to be the country’s most eligible bachelor.

On Nick’s arm, Rachel may as well have a target on her back the second she steps off the plane, and soon, her relaxed vacation turns into an obstacle course of old money, new money, nosy relatives, and scheming social climbers.

Kevin Kwan was born and raised in Singapore, where he attended Anglo-Chinese School in the mornings and spent his afternoons either hiding from his Chinese tutor or chasing after neighborhood dogs on his bike. When he was eleven, he moved to the United States, where the next few years were a blur of trying to survive high school, reading too much F. Scott Fitzgerald and Joan Didion, and dreaming of living in New York.

After obtaining his first degree in creative writing from the University of Houston, Kevin moved to Manhattan to pursue a BFA at Parsons School of Design. Kevin’s early years in the city were spent working for Martha Stewart Living, Andy Warhol’s Interview magazine, and M&Co, the legendary design firm founded by Tibor Kalman.

In 2000, Kevin established his own creative studio, where he specialized in producing high profile visual projects for clients such as the New York Times, the Museum of Modern Art, Rockwell Group, and TED.com. Many unforgettable experiences followed, like creating the ultimate publishing tribute to Oprah Winfrey’s groundbreaking television show, handling Elizabeth Taylor’s fabled jewel collection while producing Elizabeth Taylor: My Love Affair with Jewelry, and serving as the visual consultant for the re-launch of the TED website, which exceeded a billion views in November 2012. (read more)

Congratulations Kevin Kwan for being the April book of the month for 2018!

Feel free to leave comments below or at Goodreads.com.  We are looking forward to hearing what you all think of this month’s selection.